Ultimately we want to be able to record high speed (with 12-15 Gbit/s throughput ) footage (uncompressed raw as DNG sequence) inside the AXIOM Beta to some sort of solid state media. This page acts as a hub to collect requirements, reasoning for/against particular aspects and solutions.

SATA 3.0 (6Gbit/s) requires Multi-Gigabit-Transceivers (MGTs) which are not available on the Zynq 7020. In addition it requires an Open Source FPGA implementation -> Elphel SATA2 implementation

This includes M.2 and CFast as they are based on the PCI Express interface. Requires Multi-Gigabit-Transceivers which are not available on the Zynq 7020.

Since the interface for writing data to (micro)SD cards is pretty simple (electronically and protocol wise) the idea is to use an FPGA to act as raid controller and distribute high speed input data over N slower (~100MB/s write speeds) microSD cards. The raid controller should be able to define how many cards are used for parallel backups and how many for increasing throughput.

When using a card slot holder like this we would utilize the available PCB space most effectively: 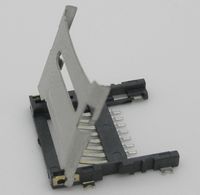 Conclusion: Using 5 microSD cards in a raid gives roughly the same combined speed as using one 2.5" SSD. In this configuration the SSD is less than half the price per GB as the microSD raid at roughly the same physical dimensions.

When using 32 microSD cards in the raid it would require roughly 7x 2.5" SSDs in a raid to match the same speed resulting in roughly 7 times the volume of the microSD card raid.

In comparison to the microSD card raid approach e.MMC has the following