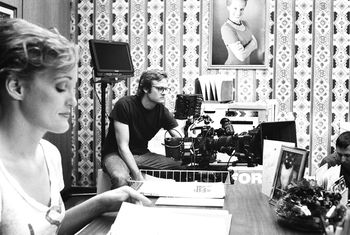 For over a century the world of film was dominated by analog cameras and celluloid, but in the late 2000’s things changed radically with the adoption of digital projection in cinemas. It was a natural next step, then, for filmmakers to shoot and produce films digitally. Certain applications in the scientific field, large format photography and fine arts still hold onto 35mm film processing but the reduction in costs and improved workflows associated with digital image capturing have revolutionised how we create and consume visual content.

The demand for digital cinema cameras ripped through the marketplace and camera manufacturers, with the intention of securing market positions for themselves, devised techniques to close their products off from scrutiny. Typically this has been done by implementing reduced accessibility and control for users. A precursor to what’s happened in this arena has of course been the introduction of the internet and the beginnings of freedom of information - those who’ve previously capitalised on existing business models are still opting to manoeuvre inside paradigms associated with secrecy and competition. Across all sectors, not just film and its marketplaces for related equipment, it’s clear that these paradigms are proving difficult to shake off… but signs that it can be done are emerging.

Film-making has long been considered an expensive discipline accessible only to the select few. This all changed with the adoption of movie recording capabilities in digital single-lens reflex (DSLR) cameras. For multinational corporations like Canon or Nikon this “new” feature was a relatively straightforward addition to existing models when you consider that most compact digital cameras at the time could already record video clips. But when this was done it was the first time that a large diameter image sensor, the vital component for creating the typical shallow depth of field that we consider cinematic, appeared in consumer video cameras. In recent times, and because existing manufacturers have proved reluctant to open their protocols up to the wider world, user groups have accepted responsibility and contributed to the DSLR revolution first-hand, e.g. the Magic Lantern community.

In 2006 Oscar Spierenburg, a Dutch painter and film director, noticed a discussion taking place on DVInfo.net entitled “3 channel 36 bit 1280 X 720 low $ camera”, inside which Elphel cameras, which are typically used in scientific applications, had been mentioned.

In the same year a discussion thread entitled "High Definition with Elphel model 333 camera" was posted on the DVInfo.net forum, whereupon we discussed how best to adapt Elphel open hardware camera devices for use in film production. Sebastian Pichelhofer discovered this thread in 2008 and assisted with the project by developing an Elphel camera internal hard-disk recorder user interface. 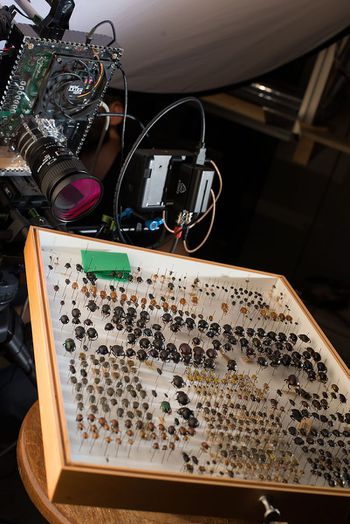 By early 2009, and because over the course of three years upwards of 1000 posts had been submitted to this thread, we realised that it was going to be difficult to maintain a full overview of the project in this way, and consequently a dedicated website was established. All of the decision making and naming/logo design was decided upon by the community.

The core team started working on a new camera concept in Summer 2011. In a vote Nathan Clark's idea to call the project "AXIOM" won by far.

Originally we wanted to use the Elphel 373 camera. This was proposed by Elphel in 2009 to become the successor of their 353 camera which had been the standard at the time. We were very excited about new possibilities and performance increases, but its development was stopped suddenly and the project was frozen for three years. Elphel Inc. had shifted the company's core business focus towards developing a panoramic camera solution. This culminated in our decision to create an AXIOM camera from scratch and thereby design a completely open source system around the film-making community’s requirements.

After having done some contracting work with Elphel during 2011, Sebastian began to focus full-time on the project and in July 2012 the plan to create an AXIOM camera hardware prototype from scratch, and thereby overcome some of the limitations that were found to be inherent with Elphel hardware at the time, was announced at the Libre Software Meeting in Geneva. This prototype became known as AXIOM Alpha.

The AXIOM Alpha was an FPGA and CPU combination based on the Zedboard. By using off the shelf components we interfaced a Super35 4K image sensor with an HDMI linked external recorder. The Alpha featured a Nikon F-Mount and was encapsulated in a transparent, laser-cut enclosure to offer its internal components some protection. It was mainly intended to prove that, in the simplest way possible, everything could be made to work, but the system worked so well that it's still used by the community for workshops and for the shooting of small projects today.

One such workshop took place at the 37th Clermont Ferrand Short Film Festival where students and film-makers got to explore and utilize the camera first hand. Other projects have involved attaching the AXIOM Alpha to a cable camera at Schloss Schönbrunn in Vienna or shooting Shots of Insects. Essentially though, the AXIOM Alpha was used to gather feedback in typical shooting scenarios so that ideas could be incorporated into a future, more modular, kit version aimed at developers and early adopters – AXIOM Beta Developer Kit, but this prototype was the culmination of years of cooperation dating back to 2006.

For many years the groundwork for building an open source digital cinema camera had been a community-only driven project. People contributed because of personal interest and the project evolved slowly over time, but in the end it was anarchy to some degree and nobody had any responsibilities. While we had goals, we had no way to help guarantee that we'd ultimately achieve them and parts of the project stagnated because we couldn't find the right people with the required skills.

Shortly after development on the AXIOM Alpha began, and to combat this, a non-profit organisation was established to provide legal shelter for the community and an apertus° company was registered in order to facilitate responsibilities that had previously been neglected, e.g. signing contracts with electronic part/service providers, paying for prototype manufacturing etc. Because of his drive and enthusiasm for the project Sebastian was elected apertus° Association chairman.

After reading a local hackerspace forum post in May 2013 Herbert Pötzl became aware of the community’s efforts and met with Sebastian shortly thereafter. Herbert already had an extensive background in electronics engineering and software development and was appointed AXIOM Technical Lead. After Herbert helped to develop critical aspects of hardware and software the AXIOM Alpha prototype was showcased at the Vienna Hackerlab in March 2014 whilst rough planning for a more modular, powerful camera was well underway.

The decision was taken to find out whether there was enough demand to successfully crowdfund the research and development for a successor to the AXIOM Alpha and, after surpassing the budget goal through an Indiegogo campaign in 2014, work began on creating AXIOM Beta - a five printed circuit board stack, FOSS and open-source hardware, digital cinema camera incorporating the ams Sensors Belgium CMV12000 CMOS image sensor. During the AXIOM Beta crowd-funding campaign, as a perk, and to show our gratitude to those who contributed towards the project's research and development, we elected to give backers the opportunity to purchase either an AXIOM Beta Developer Kit or a more mature, end-use version AXIOM Beta Compact at cost. 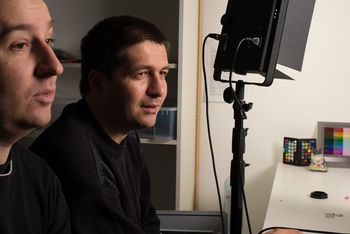 Sebastian and A1ex in the lab.

In recent times, and because existing manufacturers have proved reluctant to open their protocols up to the wider world, user groups have accepted responsibility and contributed to what became known as the ‘DSLR revolution’ first-hand eg. the Magic Lantern community. Magic Lantern is a free and open source software add-on that runs from a camera’s SD/CF card. It added a host of new features to Canon’s DSLRs that weren't included from the factory by Canon. Because the AXIOM project and the software they originally pioneered are underpinned by the same ethos, Magic Lantern partnered with apertus° Association in September 2014. Since then the Magic Lantern team has been responsible for the color science and raw processing inside the AXIOM Beta.

In January 2015 we started producing project update videos to keep the community informed regarding development: AXIOM Team Talk Episodes. In the beginning of 2018, and to serve as an intermediate source for updates in between these Team Talks, we introduced monthly, html newsletters - to which you can subscribe here.

When we first started the AXIOM project, one of the underpinning motivations was that we wouldn't emulate the common trend whereby cameras are typically given artificial lifespans to ensure that users feel the need to constantly replace their camera with a newer model offering slightly improved features. As is common in development we gave everything version numbers e.g. AXIOM Beta I, AXIOM Beta II etc. but it soon became obvious that this could be perceived as one version superseding the other or one model being more powerful than another, when there's no sequential nature to Beta enclosure versions at all in fact. To make options clearer, different AXIOM Beta enclosures were renamed in November 2017. AXIOM Beta I: Developer Kit became AXIOM Beta Developer Kit or AXIOM Beta DK, AXIOM Beta II: Production Ready became AXIOM Beta Compact or AXIOM Beta CP, and a third enclosure concept option was introduced: AXIOM Beta Extended or AXIOM Beta EX.

With preliminary internal image processing the camera is achieving very promising image capture characteristics, indicating that, when development is more comprehensive the camera will provide creatives with the ability to record digital film at exceptional quality.

With a clear initial target audience of early adopters and developers, the AXIOM Beta Developer Kit was aimed at those who want to actively participate in and contribute towards development. As the camera matures, the target audience will expand towards professional applications and end users. Those professional applications are typically, but not limited to, any environment suited to compact form-factor, high performance cameras e.g. aerial recording, car mounting, gimbals, cranes, jibs, cable cams, action cams, handhelds etc, but the Beta has attracted interest from a wide range of disciplines, such as the astronomy, industrial and scientific fields, on account of a user's being able to easily adapt the camera to the specific project's requirements or their being able to process/analyse images directly inside the camera instead of on a remote computer. With a small form factor, the AXIOM Beta is ideally suited to environments where DSLRs are commonplace.

With the AXIOM project, users are being given more control over the configuration of their camera so that it can be adjusted to their own needs or liking, and thanks to the camera’s construction there really is no limit to what’s possible. The role of apertus° is to assist the film-making community with support in this regard and to provide a platform which simplifies configuration or conversion and to encourage community participation now and in the future.

For an overview of AXIOM Beta and its components see Camera Structure.

For an interactive and more detailed time-line of project benchmarks please see Project History on apertus.org.